In honor of World Cerebral Palsy Day, I want to talk about a great part of my life, Mac, who has C.P., and about what it’s like to spend my days with “his Eminent Lovableness. ”

Fortunately, we are really good at that.

I do change, dress, move, and feed Mac, as needed. I brush his teeth, give him his medicine. I do his laundry, dishes, and other light house work. I accompany him to doctor’s appointments. I push his wheel chair for walks. I guess at what is bothering him when he is annoyed or unhappy in some way. I try to make sure he is always safe, clean, and comfortable.

That’s the stuff I’m supposed to “do.”

I make a little bit of money for this, and my job is very rewarding. Also people often say I am sweet to be doing it. Encouragement is always nice.

The part that is harder to see unless one is with us, is that Mac and I are friends. 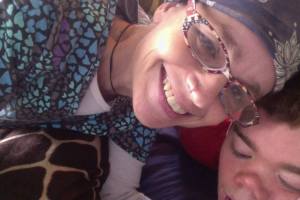 If you ask Mac about me, he will often say one of the few words he is able to make come out right, “Yuck.” He thinks this is funny, and I do too.

However,  “yuck,” doesn’t actually describe our friendship that well.

In normal life a young man in his twenties and a woman in her forties, who were not related, would not hang out all the time. They would probably not find much reason to be in the same place for long.

But here we are, hanging out during one of our favorite times of the day; the late afternoon, when lunch is cleared away, and the sunshine through the window is turning a honeyed gold. Miles Davis is on the radio, the laundry is folded, and my feet are on the foot rest of his wheel chair next to his own. I am writing. He is gazing in the general direction of the window.

We both love it.

I look up at him, and he smiles. I don’t know how he knows I looked up, since he can’t see much except possibly shadow and light.

I like to think he knows I am looking at him because we are connected by heart.

Mac doesn’t “do” anything, in the way the world defines doing.

What Mac does is be present, love those around him, and deeply enjoy life.

His face lights up when someone he loves is near, when his family comes home, when he hears his brother’s voice over the phone, when he knows he is about to go somewhere with his parents. (OK, also he is very happy when he thinks he is getting away with something, like when  I have forgotten his pills, for instance.)

He can’t hug us since his arms don’t work well enough mechanically to do so. But he leans his head against us and nuzzles us. That is a Mac hug.

He shows love by forgiving us when we make a mistake, like accidentally spilling something on him, or inadvertently pinching him or something.He might be mad for a minute, but he forgives.

He trusts us that we will be there when he comes off the edge of the bed toward his chair in our arms. He knows we will make sure he is safe.

Sometimes he is so happy to be with the ones he loves, he screams with joy.

Sometimes he squeezes my hand when I am sad.

He swings his head up like a crazy periscope when I come in in the morning, especially if I have been gone for a while.

He hangs out with his good friend, Shawn, enjoys the afternoon, and smiles at her.

Mac takes deep joy in the quotidian routines of living. He loves all the different parts of the day; each ritual of the days’ passing, each interlude of inactivity or quiet.

He shouts with enjoyment when he hears music he loves. He appreciates the people around him. His wild laughter at everyday situations, like being accidentally outside when it starts to rain, are about the joy of living. His various “happy Mac” expressions are enthusiasm about the moment. He expresses his contentment by saying, “Good-good!” These are all expressions of gratitude. Gratitude is about being, too.

In that way, Mac is really busy. 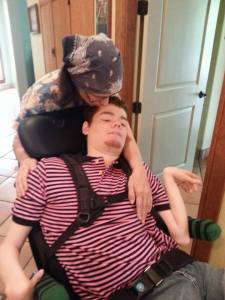 For more about Mac 🙂

Shawn Chapman is the mother of two young adult daughters, enthusiastic grandmother of two small children and a toddler, a Discalced Secular Carmelite and writer. (Catholic Columnist for Bryan-College Station Eagle Newspaper. She is working on a book for Our Sunday Visitor. She likes hanging out, reading, and cooking awesome vegan food.

One thought on “In Honor of World Cerebral Palsy Day”

“Lord, I offer You the cell of my heart;
may it be Your little Bethany.
Come rest there; I love You so.”

St. Elizabeth of the Trinity