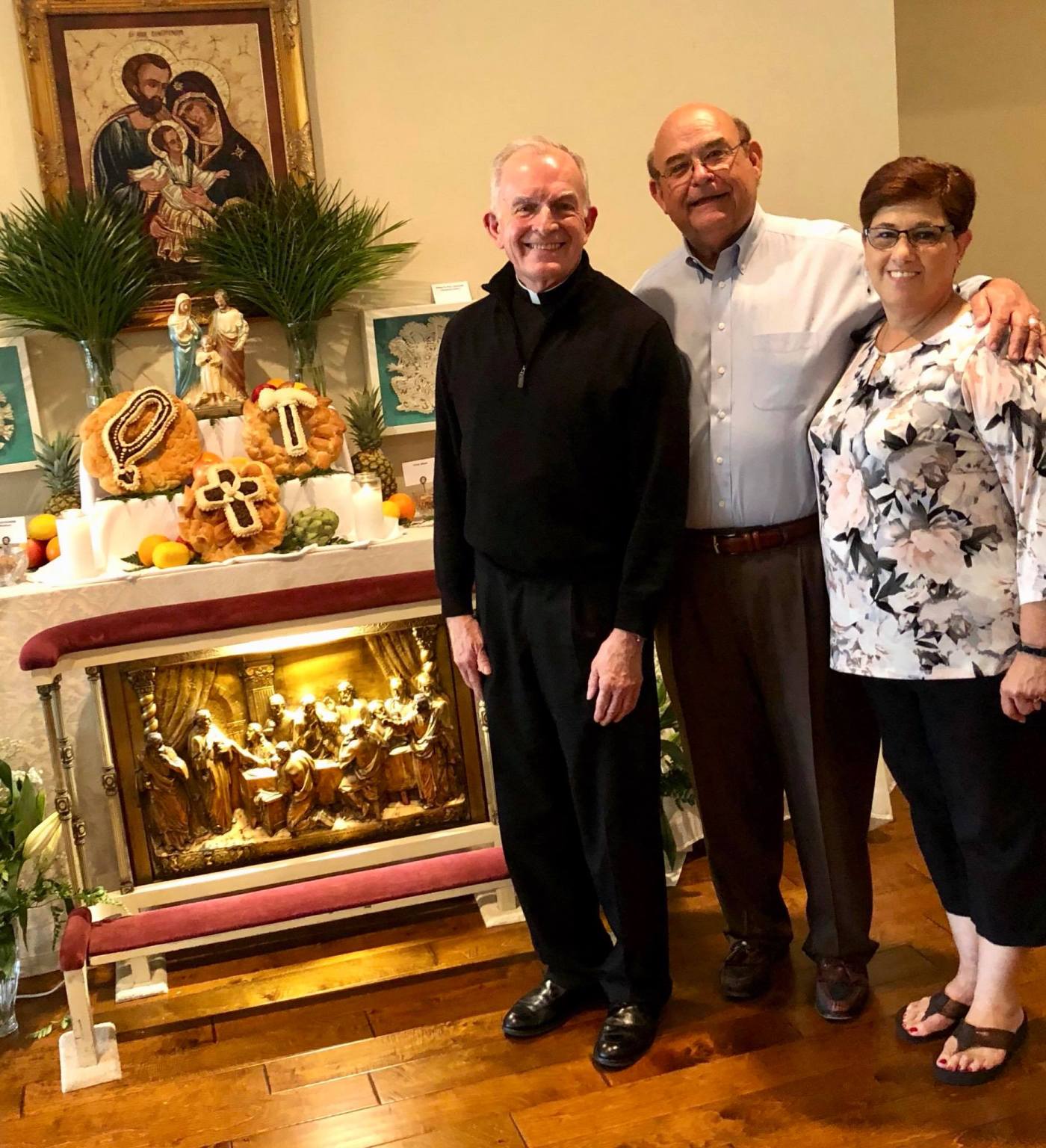 In the late 1800’s groups of Italians, mostly from the towns of Corleone and Poggioreriale in Sicily, migrated to the Brazos Valley and settled in and around Bryan. By 1905 there were about 3000 Italians living in Bryan. They founded St. Anthony’s Catholic Church  and a little mission church in the country side, San Salvador.

Many of the names that fill the historic Catholic cemetery, Mt. Calvary, in Bryan, are some of the same family names you will hear around town now; Scarmardo, Ruffino,  Patranella, Palasota, Fazzino, and Lampo, are just a few of them. These Italian names are still names of some of the businesses, and streets of Bryan. They are woven into our history, part of our life, as so many of the descendants of those families are still with us here.

Some families still make traditional Italian St. Joseph altars, often in thanksgiving, if they have promised one to St. Joseph in response to prayers answered. When his feast day is coming up, people will get to hear there is an altar and thousands, (yes, I’m serious,) will come from all around. The family and friends hosting the St. Joseph altar will cook for days in preparation. All are welcome. Some years there are no St. Joseph altars. Some years there are several, and one can make a tour of the different houses where the celebrations are being held. These occasions are also considered a chance to share with the less fortunate. The tradition of these St. Joseph altars originated in Sicily, of which St. Joseph is the patron saint, and have several interesting customs associated with them that are still practiced here today.

I visited  Lillian Scarmardo Hughes and her husband, Tom, to learn more about St. Joseph altars, as they prepared to celebrate their own “small” St. Joseph altar celebration at their own home. They are expecting about 60 people.

There is a lot of variation in St.Joseph altars according to the people who make them. However, there are certain things that are traditional and defining. The altar is set up in a household or common building such as a parish hall or school. It is made up of three tiers to symbolize the Blessed Trinity, and also the Holy Family.

The top tier will hold an image of St. Joseph or of the Holy Family, surrounded by greenery, fruit, and flowers.

Next there will be at least three breads made for the occasion, each in a shape of a symbol of St.Joseph, of Jesus, of Mary. Lillian and Tom have chosen to represent the Holy family with a rosary for Mary, a cross for Jesus, and a hammer shaped bread for St. Joseph. These breads are called panne grosso, “big breads.” Lilly tells me that over the years on some altars around town, the tradition has grown to include other saints as well, and you will seesquartucciata made in the shape of the symbols of other saints as well. People who have a devotion to one of these other saints will bring breads over to represent them for the altar as well.

On Tom and Lillian’s home alter you can also see some lovely porcelain templates from Poggioreriale  for the beautiful intricate pastries made for the altars; fig cookies called cuccidatti.

Lillian and Tom raveled to Italy twice. Lilly was able to be in her grandfather’s home town (he and his brother had left for America in 1880) of Poggioreiale during the preparation of the St. Joseph altars there. She was even able to meet a blood cousin! 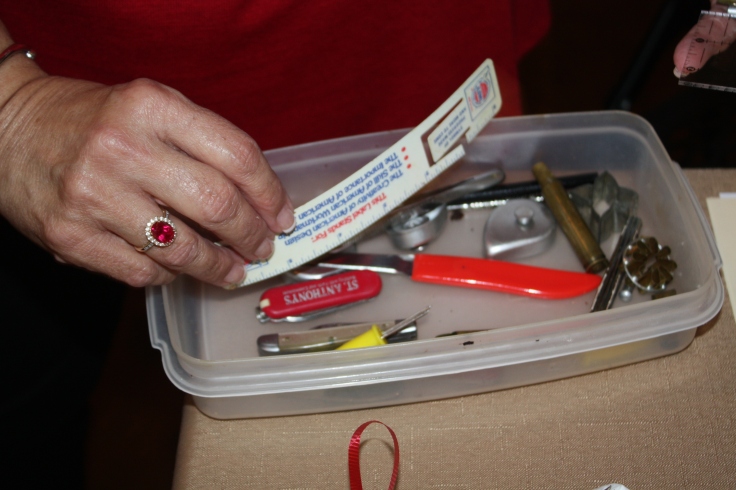 She was welcomed enthusiastically to help make the squartucciati, the ornate fig cookies. and other foods. The women there were amazed that Lillian knew all about St. Joseph altars and how to make the various pastries. They were very moved that the tradition had been handed down and carried on in Texas by their people who immigrated there. It sounded like a magical moment. I could see the glow in Lillian’s eyes while she told me this story and showed me her pictures of it.

She plans to return to Sicily at least one more time in her life.

The cooking begins very early. It is usually a meatless spaghetti dinner and plenty is made so the poor can also be served. An egg is added to the sauce for each guest, to represent new life.

For nine days before the altar is actually presented, a novena to St. Joseph is prayed, along with a rosary sung in Italian.

At some point a priest will come and bless the altar.

Some common objects on the alar will be fava beans, which the Sicilians usually fed their cattle but were reduced to eating during a terrible drought and famine. They prayed to the patron of Sicily, St. Joseph and their prayers were answered. This is how St. Joseph altars began; in gratitude to St.Joseph. 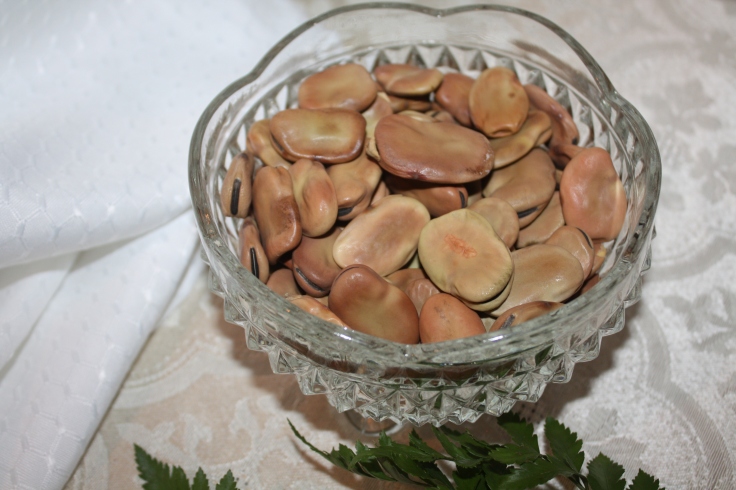 The flowers, vegetables and fruit represent the harvest and gratitude to God for His gifts and providence. 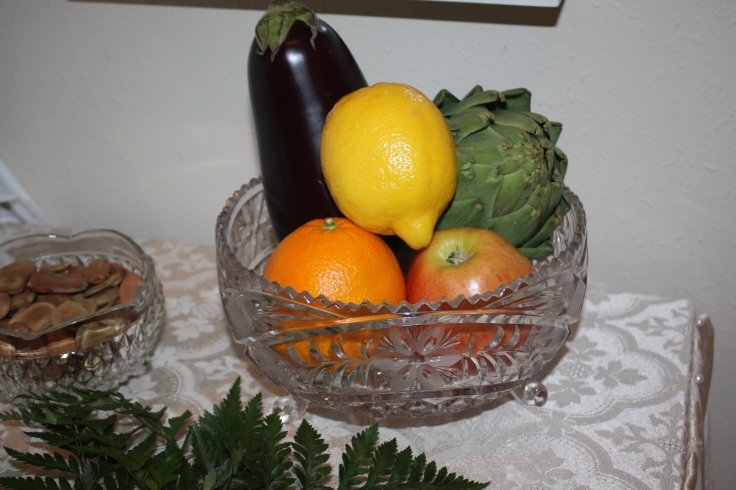 There will also be wine to represent the wedding at Cana. 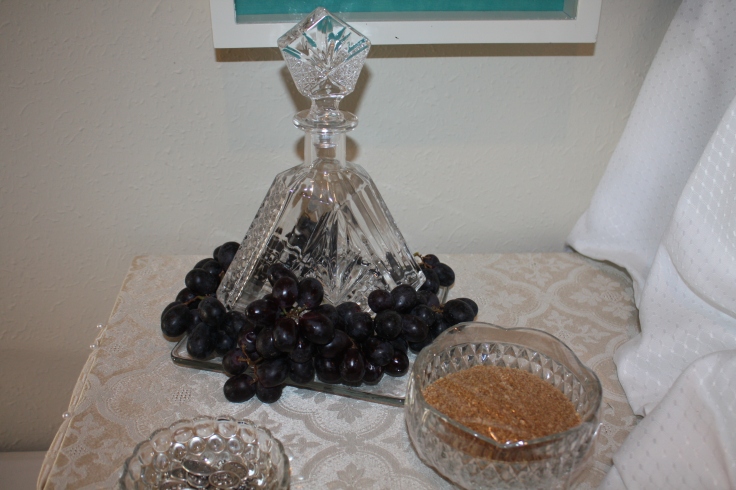 There are other symbols, as well, of St. Joseph, such as bread crumbs which represent saw dust.

There may be Squartucciatis made to look like sandals, carpentry tools, monstrances, crosses, doves, and other Christian symbols.

There are usually lilies at the altar, traditionally St. Joseph’s flower.

There is often a basket on the altar for people to put in their written petitions to St. Joseph.

On the day of St.Joseph’s feast, or the closest day the family can accommodate family and friends, the celebration is held.

There will be the Ceremony of Saints, during which people representing Jesus, Mary, and Joseph, knock three times and ask for shelter. This is called the “Tupa tupa” part of the ceremony. They Holy Family is refused twice, but the third time are welcomed in, along with people representing a variety of other saints.

The person representing Jesus, most often a child, blesses the altar with holy water and a sprig of mint.

The Holy Family is served first in three small courses. Sometimes the host will wash their feet and hands. In some families the feet of children are kissed.

Everyone is served a small glass of wine as a token of unity and friendship.

Then the altar is “broken” and all are served. Everyone is welcome, plus there is plenty left over to go out and serve the poor of the community.

Lillian loves these celebrations and grew up with them. Her mother, Rosalie Scarmardo, is remembered for having been particularly talented in helping people with their altars

After the representatives of the Holy Family are served, a spaghetti dinner and general celebration takes  place. Everyone is sent home with a goodie bag of the ring cookies, fig cookies, a fava bean, and some holy cards of St. Joseph.

Be blessed, St. Joseph, be welcome among us, pray for us.

Thank you so much to Lillian and Tom Hughes, and to Becky Scamardo for their help and generosity.

For more, please see my upcoming column in The Eagle on March 24, or read my post at ATX Catholic.